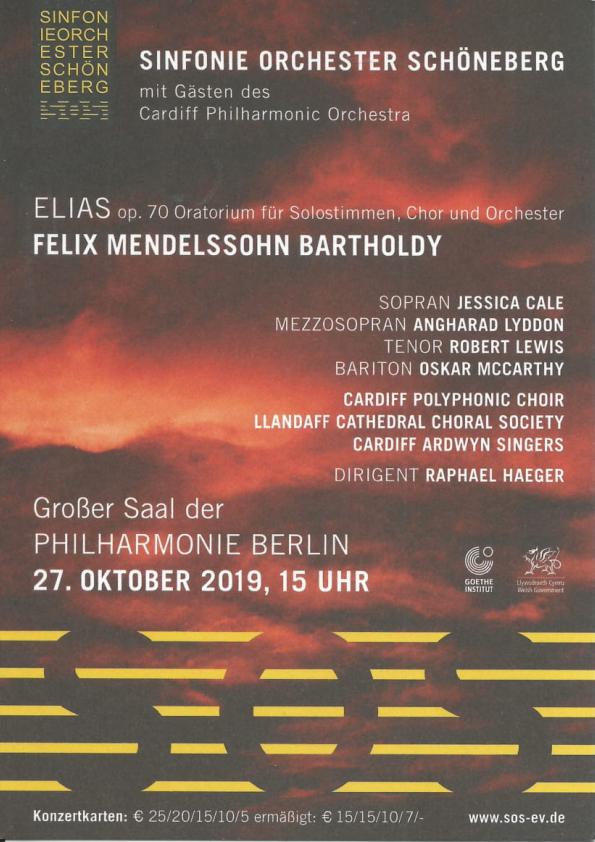 The final concert in the Elijah Project saw a performance at the wonderful Grand Hall of the Philharmonie Berlin, where it was the turn of the Sinfonie Orchester Sconeberg to perform on its home patch.

The line ups were unchanged from St. Davids with the exception that a slightly enlarged group sang Lift Thine Eyes on this occasion. Rehearsals took place on the Saturday preceding the concert and on the day of the event itself, with the choristers wondering initially what sort of audience would be attracted to the 2,440 seater venue, particularly given that another performance of Elias was taking place elsewhere in the German capital that weekend. All concerns proved unfounded however as the hall was almost at capacity for the Sunday afternoon concert.

The fabulous acoustic of the Philharmonie helped create another memorable performance which was greeted by tremendous applause at the end of part one and an ovation of some fifteen minutes at the close. An encore of the Welsh Hymn, Tydi a Rhoddaist, again drew a wonderful response.

The whole project forged strong bonds between the Cardiff choirs and their German orchestral friends, and a joint celebration was held that evening. The following day the choirs were invited to attend a reception at the British Embassy and performed Calon Lan in appreciation.