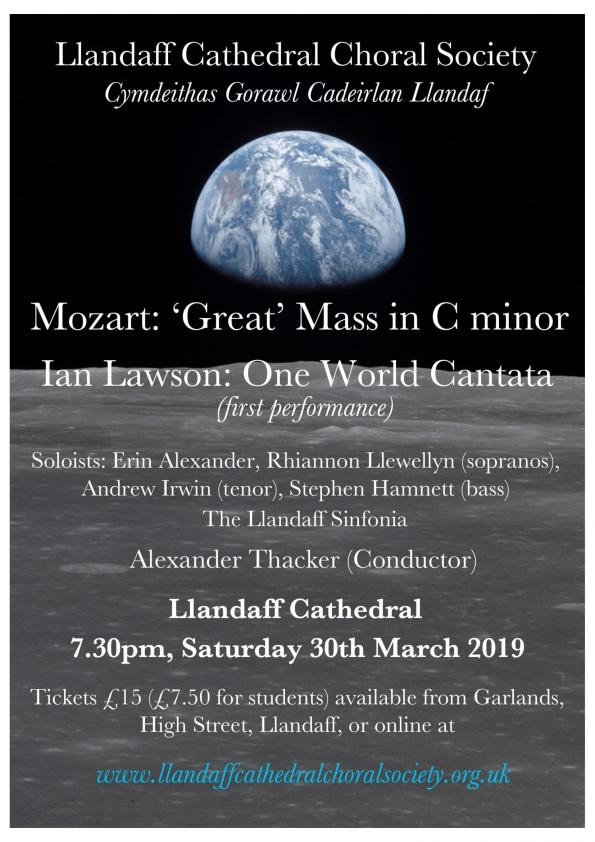 Spring 2019 saw a double bill of the ‘Great’ Mass in C Minor by Mozart and the world premiere of the One World Cantata by Ian Lawson. Mozart’s unfinished masterpiece was given in the first half and One World in the second.

As well as being a prolific composer, Ian is a record produced and studio owner who, despite composing across a number of genres, might be best known for the theme song to the animation series Fireman Sam. One World is a glorious work in seven parts, each one of which took its text from a celebrated author. The resulting combination of words by Henry Van Dyke, Wordsworth, William Blake, Robert Louis Stevenson, William Henry Davies, John Clare and Shakespeare and sublime melodies proved popular both with the choir and its audience. Given that Ian went on to join the choir, it is assumed that it went down well with him also!

The Society was privileged to work with four young and excellent soloists in Erin Alexander and Rhiannon Llewelyn (sopranos), Andrew Irwin (tenor) and Stephen Hamnett (baritone). The Llandaff Sinfonia provided the orchestral accompaniment.